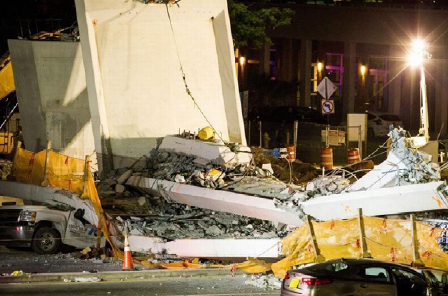 “< What I don’t understand, and I don’t understand it as a lawyer or as a regular human being, is how do you do this in the middle of the day with people driving underneath,” said construction lawyer David Haber. “That’s not just a bad idea, that’s potentially criminally negligent. It’s insane. ”

Adjusting tension cables, which ran like tendons through the 950-ton concrete span and the trusses that held up a concrete canopy on the bridge, can be a delicate operation. Over-tightening the cables, which are used to reinforce the concrete, can have devastating results, the experts say: It might cause torquing, or twisting, that would cause a specific cracking pattern in the concrete on impact with the road, something investigators would likely detect quickly.

Late Friday, National Transportation Safety Board investigators confirmed that crews were tightening tensioning cables in a diagonal truss at the north end of the bridge on the day of the collapse. But they stressed they did not know whether that was the point at which the span failed.

That’s just one of a myriad possible causes for the failure of the unfinished bridge, which crumpled to the pavement on Thursday, claiming a toll of six dead to date. Late Friday, five cars, possibly holding more victims, remained under the debris.

The NTBS investigators, who arrived on Thursday night, began what will likely be an arduous process of reconstructing the accident and assigning a cause. The investigation could take as long as 18 months, the agency said.

Also late Friday, the Florida Department of Transportation issued a statement saying the bridge’s engineer had called the agency to report cracking in the concrete at the north end of the span on Tuesday. According to the call’s transcript, which was released by FDOT, the

FIGG Bridge Group engineer said the cracking did not raise a safety issue.

An NTSB investigator said Friday that a crack in the bridge is not necessarily unsafe. Cracks in new concrete construction are not uncommon, and can be cosmetic or a sign of more serious trouble.

As crews work to remove the massive slab to retrieve vehicles they suspect hold more victims, investigators will begin combing through debris and document the site. The wreckage itself will likely provide telling details — cracks could reveal the precise location where stresses occurred that caused the bridge to fall.