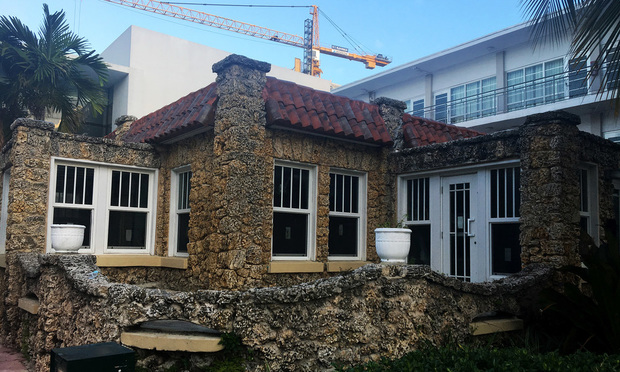 The building owner and a cigar shop that wanted to open are suing each other, claiming the other didn’t live up to its obligations under the lease for the historic property.

The historic Coral Rock House in Miami Beach was supposed to reopen as a cigar store and lounge but stands vacant amid allegations of major structural defects including corroded rebar, failing concrete and leaks.

The tenant and building owner C&A Collins LLC, affiliated with New York-based real estate investor Robert Cayre, are locked in a legal dispute over the property, each side alleging the other didn’t live up to its duties under the lease.

C&A 900 Collins and South Beach Cigar Bar LLC, affiliated with Neptune Cigar SuperStore in Miami’s Little Havana, signed a 10-year lease in July 2017 for part of the building on the northwest corner of Collins Avenue and Ninth Street. Rent started at $24,075 a year and was set to increase annually to $31,412 in the 10th year.

But each side sued the other on the same day last year, and the cases were consolidated.

South Beach Cigar Bar alleges structural problems allowing roof and wall leaks, and says C&A 900 Collins didn’t fix the issues in violation of the lease. The cigar shop said it notified its landlord several times in 2017 and 2018 about the issues, and C&A 900 Collins said it would fix them but didn’t pull permits for work on one of the city’s oldest buildings.

Attorneys that practice community association law regularly prosecute and defend against claims that sound in the law of contracts, real property, civil rights, and more….
Get More Information

Cigar Bar sent a notice to C&A 900 Collins to end its lease last Oct. 11 and sued last Nov. 1 for breach of lease and breach of covenant of good faith and fair dealing. An amended complaint added a constructive eviction count alleging the property couldn’t be used due to lack of repairs. The cigar shop is seeking $1.23 million in damages, including rent it already paid and lost profits.

The lawsuit by C&A 900 Collins denied Cigar Bar’s allegations and argues the retailer made up the alleged fraud to get out of its lease obligations. Cigar Bar agreed to take the building “as is” and repair it to a business-ready condition, the landlord said. In exchange, the owner gave the cigar shop a nine-month rent abatement and promised a $125,000 cash payout once the work was completed, the owner said in its second amended complaint. Instead, the cigar shop didn’t get a permit to start construction until August 2018, seven months after it was required to open for business.

The cigar shop wrote the landlord Sept. 4, 2018, asking for repairs to the ceiling, windows and walls within 20 days. C&A 900 Collins agreed to do the repairs while insisting it wasn’t required to.

C&A 900 Collins also took issue with a report by the Cigar Bar’s engineering firm, IBA Consultants Inc., which concluded water was seeping through the roof, windows and facade. IBA recommended the exterior coral rock wall be removed to clean the surface of the substrate wall.

The previous owner of the Coral Rock House was required to preserve the building. But the support structure designed by its engineer and installed is unique and prevents removal of the exterior coral rock without destroying it, C&A 900 Collins said in its complaint.

The landlord lists breach of contract, contractual indemnity and hold harmless, and breach of implied covenant of good faith and fair dealing counts against Cigar Bar. It also lists a breach of guaranty count against Neptune Cigars Inc., an affiliate of the Neptune Cigar store.

“It’s just a red herring because if you read the lease provision, that’s not what it says. It’s not an ‘as is’ completely,” Fallick said. “There are certain representations and warranties in that provision. Of course that’s not cited in their complaint. It’s undisputed that that provision doesn’t negate or nullify the covenant to maintain and repair. They are separate provisions. After taking possession the landlord continues to have obligations to maintain and repair.”

C&A 900 Collins’ attorney, Baron, Breslin & Sarmiento’s Jerry Breslin in Miami, declined comment, saying only that the court filings speak for themselves and C&A 900 Collins is prepared to litigate.

The Coral Rock House was built in the mid-1910s for Avery Smith, who ran a ferry before bridges linked Miami and Miami Beach, and avoided demolition in the early 2000s.

The building is on the National Register of Historic Places and is a contributing structure of Miami Beach’s Ocean Drive-Collins Avenue Historic District, meaning the city’s historic preservation board must sign off on construction permits.